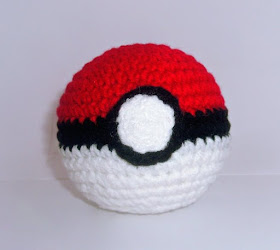 I made a bunch of these pokeballs for the kids starting way back in the mid 90's ... when they were little. They'd lose one (or the dogs would chew them up) so I'd make more. Even at their ages they still love to play with these things :)

As always, if something isn't right please let me know so that I can fix it as soon as possible.

I recommend using the 'invisible decrease' when making 3D pieces like this, it's done by simply making the decrease in the Front Loops Only. While it's not completely invisible, it does help prevent the gaps that regular decrease stitches can leave.

Being stuffing firmly at this point, if you haven't already, and continue to stuff as you go along.

F/O leaving a tail. Add any more stuffing if needed to finish the shape out. Thread the tail through the last round and pull tightly to close.

Pokeball and Pokemon are copyright Nintendo.

This pattern is an original pattern by Linda Potts (March 2009). Please do not claim this pattern as your own. If you wish to share this pattern, you may link to this pattern but please do not reprint it on your site. You may keep a copy for your own personal use but you may not sell or distribute it, or sell items made from this pattern.
WolfDreamer at 3:41 AM
Share