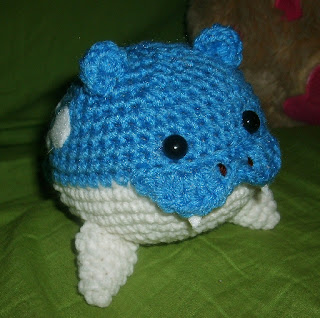 This guy is smaller than most of the pokemon dolls I've made.  I really had very little of the blue yarn left,  and I was wanting a small and easy project to 'test' my wrist out before diving head-first into crocheting again.  I think I'll be ok if I take it easy and don't try to do too much at once,  at least so far.

This particular doll will be well suited to the 'advanced beginner' at crochet -  one who's got a few easy projects under their belt,  but looking for some 'new' techniques to do.   Kind of like line dancing - and adding a little extra swish to your skirt when you spin.... it's not hard to do but sure makes you look good on the dance floor  :D

Anyway...  to the pattern,  and as always,  if you notice any typoes or just find yourself a little confused,  post or email me,  I'll get back to you as soon as I can  :D

This particular doll is rather small,  making it a quick and easy project to accomplish in a day or even an evening watching a movie.    The small number of 'parts'  and the easy nature of the construction makes this an excellent choice for the 'advanced' beginner -  one who has a couple of simpler projects under the belt and is ready to stretch out with a couple of new techniques.

I would recommend that you join your rounds when crocheting the 'body' of the doll instead of using the 'continuous' rounds method commonly used in amigurumi.  If you do use the continuous rounds method,  your color changes will be very evident and likely uneven. 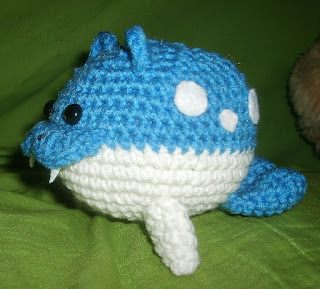 If using safety eyes,  they should be placed between rounds 12 and 13 with about 5 sc between them,  however you may wish until you've completed to round 18 or so,  and mostly stuff the body before deciding where to place them,  then finish stuffing and shaping the body after securing the safety eyes.

Begin stuffing at this point.  Stuff body firmly, without overstuffing.  Shape the body as you go and continue to stuff as you work the remainder of the body. 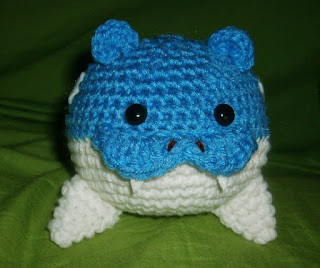 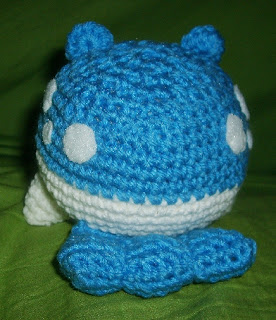 I always recommend that you pin all your pieces together BEFORE sewing them on,  to ensure that you're happy with placement and sizes.   Once you're pleased with the overall look,  begin sewing your pieces on.

If using buttons or felt for eyes,  place eyes approx as shown.

Sew the 'muzzle' as shown, centered just below the eyes.   Sew ears to the top of the head as shown.

Front flippers are sewn to the bottom of the front of the body as shown.  Tail Fins are sewn to center of back of body.

Cut small triangle shaped pieces of white felt for the 'tusks' and attach to bottom side of curve of muzzle on each side as shown.   Cut four larger and two smaller circles (freehand is fine,  as the 'markings' on spheal are not perfectly round) and sew (or glue) to each side of spheal as shown.

Using a scrap of dark yarn or embroidery thread,  make two small 'marks' on the muzzle in the center to indicate nostrils.


Spheal and Pokemon are copyright of Nintendo.


This pattern is an original pattern and is © by Linda Potts (January 2011).  Please do not claim this pattern as your own.  If you wish to share this pattern, you may link to this pattern but please do not reprint/repost it on your site.  You may print and keep a copy for your own personal use but you may not sell or distribute it, or sell items made from this pattern.