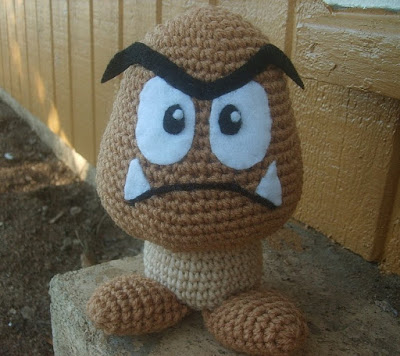 Well, after many requests for this fella, here he is. Goomba from Mario Brothers.
He's kinda cute for a grumpy guy. LOL

My girls have already laid claim to him, altho now they're arguing over who gets to keep him in their room.

As always, the pattern is here, and if you have any questions or problems, let me know I'll try to answer as quickly as I can.

WW yarn in warm (medium) brown and light brown
G hook
Felt pieces in white and black
Yarn Needle
Fiberfill
material for weighting down the plush, like unpopped popcorn or the plastic pellets they sell at craft stores

This doll really needs weight in the base due to it's naturally top-heavy design. I used unpopped popcorn (it's a bit heavier than dried beans) or you can use the plastic pellets they sell at craft stores specifically for this purpose.

Numbers at the end of each round/row indicate the total number of stitches that should be in each round or row.

F/O leaving long tail. Finish adding any stuffing needed to finalize the shape and weave in the tail, pull closed and tie off

F/O leaving long tail. Fill 3/4 full with weighted material (pellets, popcorn, beans, etc) Stuff the remained with fiberfill firmly sew to the bottom of the body (using the rounds of crochet on the body to help center the stem) using the long tail and add any more stuffing that may be needed to shape the base and hold the weighting material firmly in place. You may find you need to flatten the very bottom of the of the stem a little, but this shouldn't be too difficult as the weighting materials are much more forgiving than fiberfill.

Stuff fairly firmly, flatten the open end and match up the stitches. Sc thru both layers (closing the foot as you go) for a total of 9 sc. TURN

F/O leaving long tail. Sew this 'tab' to the bottom of the stem, and tacking the foot to the stem side as needed to get the desired positioning of the feet. (see picture for placement help)

I highly recommend that you cut out paper 'pieces' for the face features before cutting out the felt and pin the paper pieces to the doll to make sure you have the shape and size you want. Before sewing on the felt pieces, pin them all in position to double check your sizes and shapes before sewing. (it seems like extra work, but it's less than having to take it apart and resew it later. :D)

Embroider the mouth as shown using a small amt of WW black yarn and yarn needle. From white felt, cut two small 'fangs' and place as shown. From black cut the eye 'pupils' and eyebrows and place as shown. Sew the eyebrows so that the upper ends are extending off of the face about 3/4 of an inch or so. Add two very smal circles of white to the black pupils at the positions shown for catch-lights in the eyes if desired.


Mario Brothers and the Goomba Mushroom character is copyright Nintendo.

This crochet pattern is an original pattern by Linda Potts (June 2009). Please do not claim this pattern as your own. If you wish to share this pattern, you may link to this pattern but please do not reprint it on your site. You may keep a copy for your own personal use but you may not sell or distribute it, or sell items made from this pattern.
Posted by WolfDreamer at 9:47 PM

These are so awesome, I love your patterns, you really do a nice job!

Thank you very much!

Your patterns are sooo great!
I love the Goomba, I made from this pattern!

I really love how your Goomba came out, great choice of colors! I'm glad you enjoy the patterns. :D

Really love your patterns. Any hints about adding facial features??

I'm not sure what you mean by adding facial features, but if you mean the placement of the dolls eyes, nose, mouth etc, I do recommend pinning everything in place before sewing on. That way you can make any adjustments to get it *just right* before sewing. :)

hi i live in south africa and i love your patterns. I have a pattern for mario and luigi and princess peach, but i dont have one for princess Daisy, poor luigi is going to be all alone with no lover, if you can desine a princess daisy it will be fantastic P.S. are you a Christian?

I love your Mario Bros. patterns! As soon as I get to the craft store I am buying yarn to make every one of them!...I was just wondering...How tall is Goomba? He looks kinda big?! Thanks for all the Mario Bros. pattern...I LOVE THEM!!

Thanks! The exact size varies with your hook/yarn choices and of course your individul tension/gauge, but mine came out around 8 and a half inches tall.

I love this my kids love this.. You are AWESOME...My boys made me make them a(n)army of Goombas. Brown ones and Blue ones and Goomba's with the wings. After making SO MANY (cause the 3 boys insisted on this.I noticed on the base which connects to the head I used 1sc in next sc then dec over 2 sc seemed to help him stand up better. Once again my kids think you RULE!!!!!!!

this is an amazing pattern - easy to use and the final product is adorable!!! i started toad already... you have the best patterns! i've been working on these guys during finals, so thanks for making my study experience better!

I'm not sure what you mean by embroider the mouth like the pic. I can't tell what you did from the pic. could you please explain?

You have some amazing patterns and great work!
Thanks for sharing!
-r

Mario and Luigi are getting bored and lonley. The Bombombs, Chain-Chops, Goombas, Boos, and King Boo are leaderless and crazy. The 3 fireflowers have noone to place them. Toad has nothing to clompain about (besides that he cant open the peanutbutter or something else stupid) and toadette has noone to help her learn music, and worst of all, the lumas have no mama! :( so, i was wondering if you could create a Peach, Daisy, Bowser, and Rosilina crochet patterns so that i wont be afraid to sleep anymore. Please help, im starting to think that they have found a way to work together and kill me in my sleep. Thanks!
-Amy S.

I am, unfortunately, at the mercy of the economy like everyone else. LOL. I also don't generally make 'human' type dolls, altho I have made a few, it's not my norm. I tend to the 'animal' styles more than anything.

I'm not saying I won't eventually make a Peach or Daisy doll, but I will admit they aren't high on the list at the moment. Those dolls take ALOT of time, and right now my work is hectic and I don't have the time for dolls like that. But things change and someday I'll do them :D

In the meantime, I think there are patterns on Ravelry you might can check out... I'd search them out for you, but honestly, I'm running low on time cause I have to be at work in just a few minutes.

I'm sorry I can't just make things as people ask for them, I'd really love to be able to do that... but I'm at the mercy of life just like everyone else :D

I just wanna say thanks to all your amazing patterns. I'm making all the Mario Bros amigurumis that my son requested. :)
I was wondering to you plan on making Bowser? I would definitely pay for him.

Your patterns are amazing thanks for sharing. You have make my childern so happy.

Going to crochet this as my first attempt to completely follow a pattern!
I might use a smaller hook, though. I want my Goomba to be no bigger than the size of my hand, so...
This is still great, though. Thank you so much!

So cute! This is one of my favorites. I love all pf your Pokemon plushies, too.

May I request Yoshie?

absolutely love all your patterns and thanks soooo much for posting them, but i am looking forward to princess peach sometime soon??? Just desparately asking for this pattern if possible. You make a lot of kids happy (of all ages!!) when these are made :)

I always wanted to learn how to crochet but I was never able to make the time or just didn't want to sit down to learn but once I saw your little guys and free patterns to go with them I have been so eager to get my Squirtle done. Thank you so much for all the patterns. My husband and all our friends want one of these. :D

I love your patterns! It was thanks to stumbling over your Mario Mushrooms I even learnt how to crochet properly (the downside to that is that I can't crochet in my first language anymore). For a heavier material I usually use rice, but I dont know if that works with a larger gauge (I use a 2.5 mm hook)... gives the figure a great wheight, very useful for eg. Jigglypuff, the mushrooms and Aipom's tail-hand-thing. ^^ Keep up the good work and I am forever grateful for the free patterns! Without them I would never have "found" crocheting.

Um, I wanted to know what's the size of the Goomba.
I loove your patterns :D
I've already made the pokeball and the cyndaquil.
:D


Hello! very well explained! I'm from Brazil and I managed to do it! :) loved it!tenks!

Hi. I have adapted your pattern for a little boy who likes the Electro Goomba.

what's the electro goomba? why do you only crochet in the back loops in round 5 of the stem?