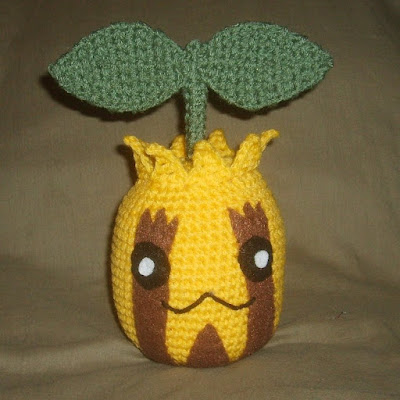 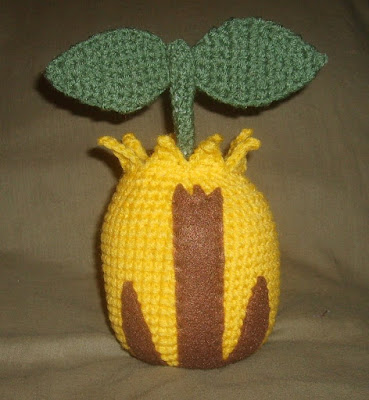 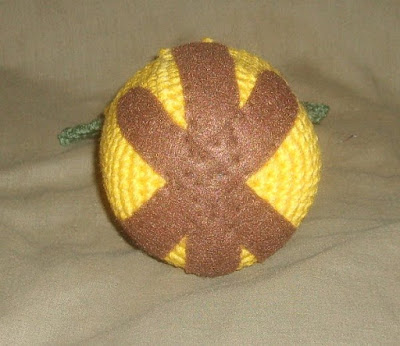 Sunkern is one of the lesser known pokemon, but he's cute none-the-less. He was also quite fun to make, and didn't really take a very long time either.

Gauge doesn't really matter in this pattern, as long as your choice of yarn and hook size result in a fairly tight stitch so that stuffing wont show through.

Number in ( ) at the end of each round or row indicate the total number of stitches that should be in that round or row.

F/0 and stuff firmly while shaping.

F/O leaving tail for sewing. Make sure that body is firmly stuff and shaped as desired, place top piece over the opening of the body and sew to body at rnd 24 (leaving the points free as shown in the pictures)

Repeat row 10 until 1 sc remains. F/O Leaving long tail. With yarn needle, weave the tail down the center of the leaf to create a 'vein'... sew each leaf to the stem securely as shown.

Cut three one inch wide strips of felt in brown. On one end cut two notches to resemble the pieces as shown in the picture, on the other end, cut to a slightly rounded point. Check that the length will be right with the body. The strips are placed with one in the center, and the two side strips are crossed over at the very bottom, (see pictures above) I recommend pinning all three strips on the body before sewing. Once satisfied with the placement, sew on securely using matching sewing thread.

Cut 2 one inch circles from black, position them as shown and pin. Embroider mouth as shown centered above the middle strip. Sew on the black circles for eyes, add two very tiny circles of white felt as 'catch lights' in the eyes (see pictures).

If necessary, adjust the size of the strips and eyes to best fit your Sunkern. Since everyone's gauge can be different, be sure that you have the strips the right size before sewing them to the body.


Sunkern and Pokemon are copyright Nintendo.

This pattern is an original pattern by Linda Potts (June 2009). Please do not claim this pattern as your own. If you wish to share this pattern, you may link to this pattern but please do not reprint it on your site. You may keep a copy for your own personal use but you may not sell or distribute it, or sell items made from this pattern.
Posted by WolfDreamer at 12:56 AM

thats cute I liked it!

he is so cute. You did a great job.

Very cute! I'm loving your patterns. I'll be linking in my next Geek Craft Roundup.

Thank you very much! I look forward to seeing what else you have on the roundup :D

Hello,
I am making youre beautifull sunkern!
Thanks for all the free patterns!
I found a problem in row 4 of the leaves. It should be 2 sc in first sc, sc in next 4 sc, 2 sc in last sc.
I hope One day ill be as skilled as you!

Im very sorry, i ment row 8 of the leaves!