Creative slumps, flags and other stuff

I'm in a slump. I hate slumps. For one thing, just the word is distasteful. But mostly everything about it is annoying.

I usually make something because I'm inspired to make it, but I have nothing 'inspirational' going on right now. Easter is kinda lame (sorry but it's true)... everyone makes cute little bunnies and bonnets and so many eggs we should all be dead from clogged arteries by now. Not that I don't like Easter I do, it's just... commercialized... like most holidays.

I like flag holidays. Flags are fun to make. I've made a few. 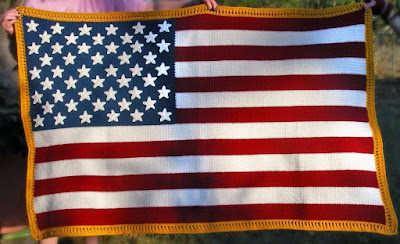 I don't have a pattern, I just pulled out one of my old flags that had been retired from the flagpole and measured the stripes and the blue box, and crocheted to the measurements, then I made fifty stars and sewed them on one by one. The stars were really alot of fun, but the placement can be tricky. I have to admit, I gained a great deal of respect for the remarkable ladies that made all those flags generations ago by hand. 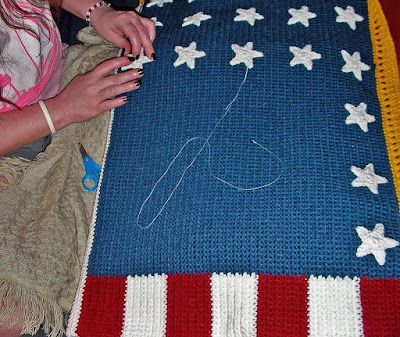 The most challenging of all the flags I've made so far, is the Confederate Flag. It was made for my oldest child, my son, who'd just recently gotten his first townhouse and I really wanted to make him something for his new place. He's always wanted one of those flags, so .... I looked at a thousand pictures, decided on my measurements based on some information I found on other flags, and *winged it* LOL. I seem to work best under pressure. The results were great tho, and he loves it. Which is really what mattered most. 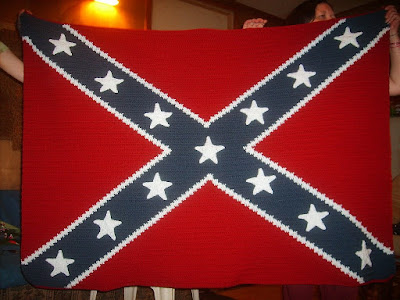 The base part of the flag, (the red and blue&white X) is all done in one piece. I don't like to carry the yarns across the back, so I worked with 'bobbins'. At one point I had 9 bobbins working at once on there... 4 white, 2 blue and 3 red. I never have found a good way to keep the bobbins from tangling up on larger projects like this, so I just stopped and untwisted them every few rows. The stars, again, were made separately, and sewn on after the base of the flag was finished.

At the moment tho, I'm completely out of ideas. I know all craftsters go thru this, and I have gone thru it more than a few times, but it's always difficult. I'm one of those people that just can't stand to be without a project ongoing. I have to have something for me to do. I can't just 'watch tv' ... I have to have something to crochet while I sit there. Otherwise I have to find something else to do. Curse my 'just can't sit here doing nothing' personality.

Well I'm sure this 'slump' will end, as all the others have ... with something good to do. Maybe we have to go thru the 'down' times to really encourage the creative part of us to get a move on and make something happen.

I guess that's what 'starving artist' is all about. You have to be hungry once in a while to truly appreciate the bounty you will receive later. :)

I think I'll make a good ole 'Lone Star Flag' next time I decide to do a flag. I do live in Texas after all - and that would be three of the Six Flags under which the state has flown.

Those flags are awesome!!

I hate the word slump too. They happen though. I watch movies with subtitles because I can't just sit there and not do anything. At least this way I have a legitimate reason that I'm not working on something.

Thank you! And I usually have subtitles on too, because I have hearing problems. I ended up going thru the mending stack and fixing up the clothes that had piled up there. At least it's something to do :)

Those are amazing!! It makes me want to make one, I live on a base and I know a lot of soldiers and their wives would love to have some. I was curious about what you had done. Just about the measurements and how to make a star and also what stitches you used. Thanks so much!!:)

Thank you so very much!

I don't remember the exact number of stitches, but what I did was to measure a flag I have and crocheted to the measurements. I used single crochet for the red, white and blue. The stars are fairly simple, crochet 15 dc in a magic ring, join and then ch 5. Sl st in the 2nd ch from the hook, sc in next ch, hdc next ch, dc in last ch. Sk two dc, sl st in the next dc, ch 5 and repeat the process. Perhaps one day soon I'll do a tutorial on stars like that, with pictures to help, I just haven't had time lately.

Sometimes when working with many color changes, it's easier to have many different 'balls' of yarn for each color section, rather than trying to carry the yarn across your work the time.

I guess the bobbin term is kind of outdated, but I'm old and forget those things :) It's basically just a ball of yarn. But I must say, the more balls you have 'going' at once on a single project, the more difficult it gets to keep them in order, they tend to tangle up even when you're careful :)

I was wondering what brand of yarn did you use?

I would love to make something like this for a military couple I know. Do you think you could help me come up with a pattern??? It's lovely!