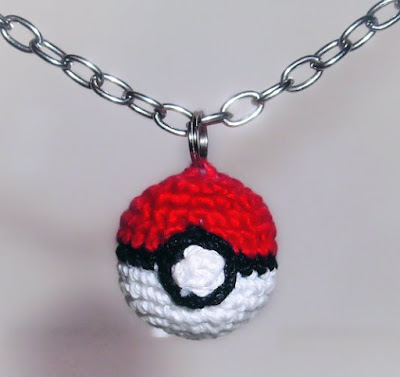 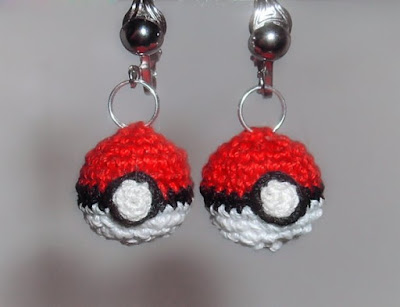 I've made several of these for my daughters and their friends. They just love anything pokemon related. LOL

As usual, if anything is not right, let know so I can change it :)

Begin stuffing the ball firmly and continue as the rounds are finished.

F/O leaving tail, finish out any stuffing needed (a yarn needle may be helpful getting the stuffing evened out on such a small piece) weave the tail thru the last round and pull tight to close.

Repeat first round of pendant.

Using red sewing thread and needle, sew one of the jump rings to the pokeball (on the red end), in the direction as show in picture so that when strung on a chain, the button will face to the front.

Rnd 4: sc in each sc around. Change to black crochet thread at end of round. (18)

Rnd 5: sc in each sc around. Change to white crochet thread at the end of round (18)

Begin stuffing firmly and continue as you go along.

F/O and finish same as pendant.

Same as for pendant button base.

Using red sewing thread, sew jump rings to the pokeballs on the red end making sure that when hooks or clips are connected to rings, that the button will face in the right direction. Use photo to help with placement.


Pokeball and Pokemon are copyright Nintendo.

This pattern is an original pattern by Linda Potts (March 2009). Please do not claim this pattern as your own. If you wish to share this pattern, you may link to this pattern but please do not reprint it on your site. You may keep a copy for your own personal use but you may not sell or distribute it, or sell items made from this pattern.
Posted by WolfDreamer at 3:49 AM

I like your site!! I invite you to take a tour on my jewelry website, and if should more information is required. http://www.or-jewellery.com

...please where can I buy a unicorn?

loveloveLOVE this idea of pokeball jewelery! as soon as i gather the right thread colors im going to make myself a necklace! just curious, but whats the difference between the earring pokeball and the one for the necklace? thanks for these free patterns!

The difference is in the size of them (the pendant pokeball is a bit larger around).

It's all basically in the number of rounds completed. :D

Hi! Great tute! Again, I will be linking at http://www.handmade-jewelry-club.com/ in future post.

What is a magic circle?

I have absolutely adored these for a long time now. I can't wear necklaces because even the lightest chain gives me headaches, but I thought about making a pair of clip on earrings for myself! Just this past Thursday I was at the mall and I decided, what the heck, I'm 21, I can get my ears pierced. So I did. And this is the first pattern I thought of making for my new found earring obsession! So happy to finally be able to wear earrings! And pokeball ones at that! Thank you so much!

I can see these an ornaments for those boys that like all things Pokemon. :) Thank you!
I hope you are well.

I am making these as Christmas gifts for my teenage daughter and her best friend who both love Pokemon! Thank you for this excellent pattern! They will beautifully match the Pokeball hats I made for them a year or two ago :-) ♡